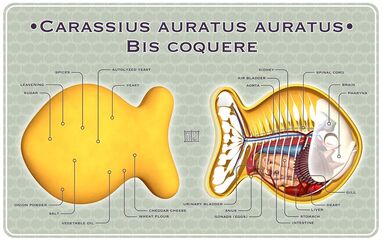 Goldfish crackers are edible crackers designed for little children to bite the heads off of and stomp on vigorously in the middle of the road. The ultimate reason they were created was to stimulate the violence of people and generate their hatred towards the innocent fish, for further encounters with other people and knowledge how to bite heads off.

The Goldfish population began to grow and more and more colonies of Goldfish crackers grew into existence. They continued to find homes under the beds of small children, beat the children until they were dead, and move on to another child's bedroom. But in the Pepperidge Farm nuclear incident, tiny random nuclear missiles were suddenly launched from the Pepperidge base and were targeted for every Goldfish in existence. All the Goldfish died except for one, who was currently in the esophagus of a possessed koala. The missile killed the koala instead, saving the Goldfish. This Goldfish set out to continue it's mission and form a single colony of Goldfish crackers to beat children internationally to their deaths.

Community content is available under CC-BY-SA unless otherwise noted.
Advertisement